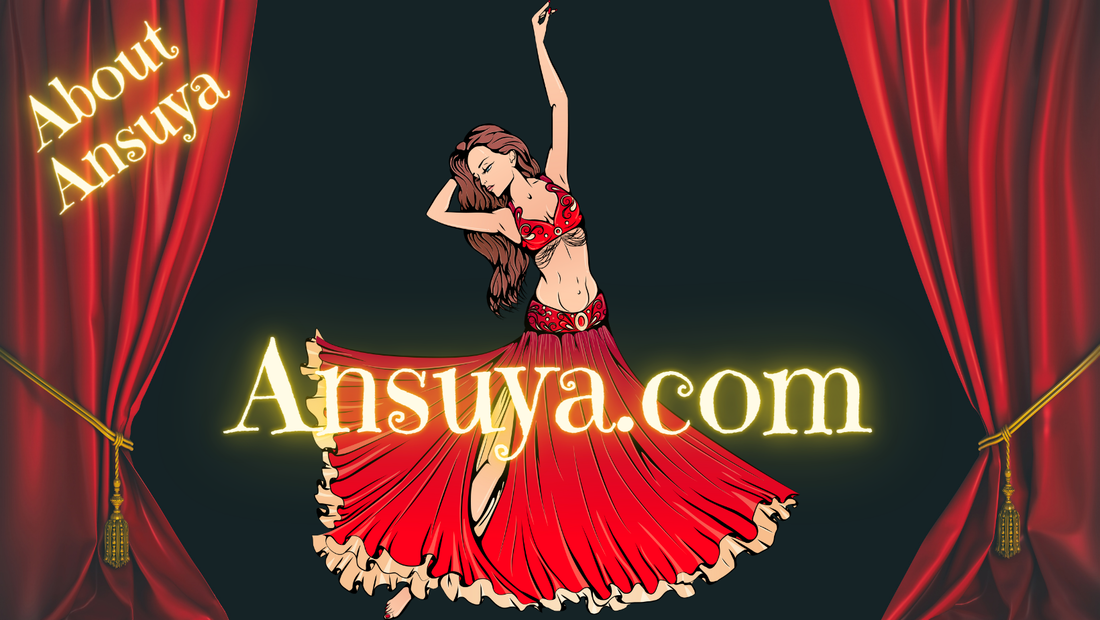 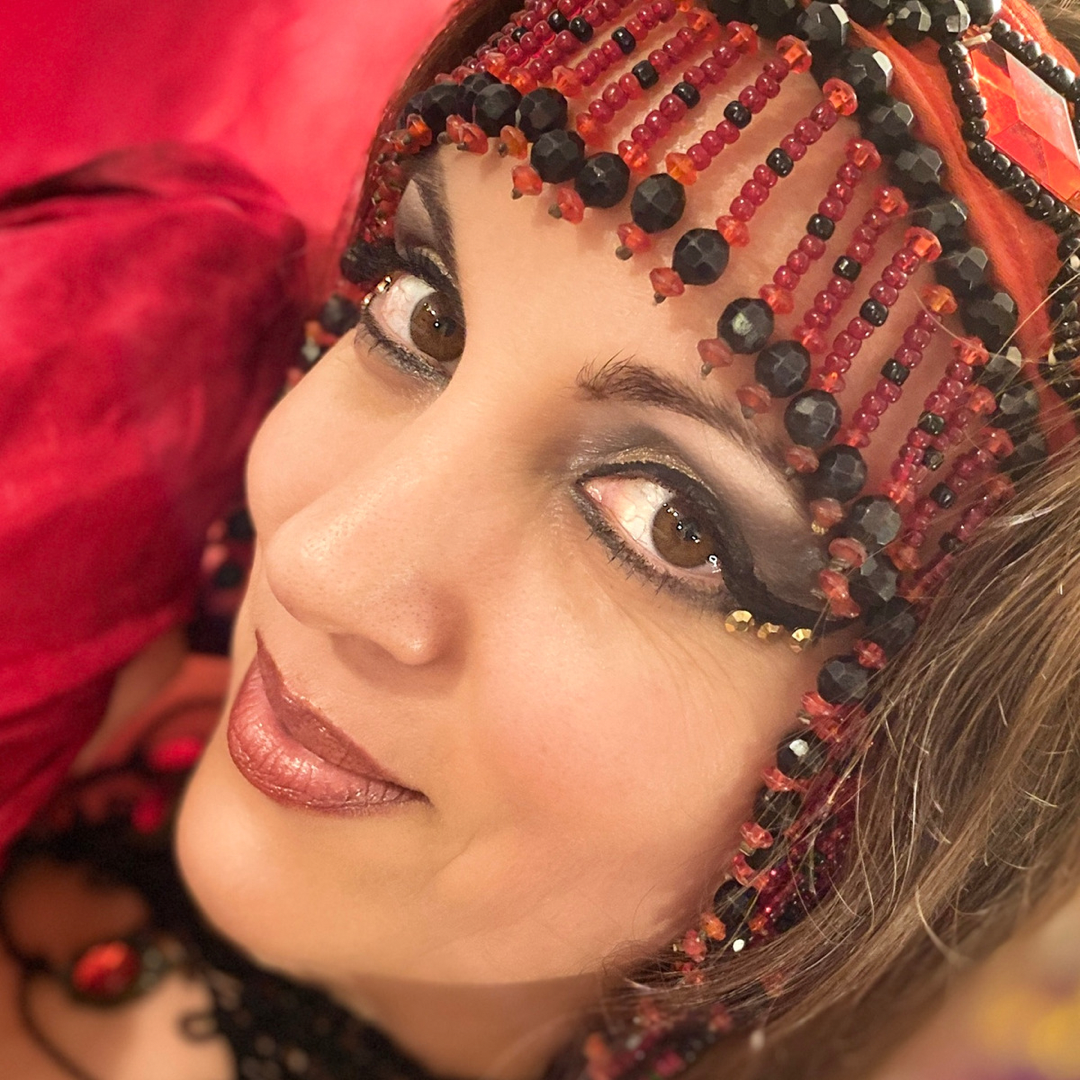 Through each stage of my development as a woman, Bellydance has offered me gifts to enhance my femininity and light the way toward a sacred expression of sensuality. Now I'm honored to light a path for others as my teachers did for me! ​

Hello, it's so nice to meet you! My name is Ansuya and I'm very excited to share more about myself with you here!

I'm beyond appreciative to be able to say that I am a second-generation, internationally recognized superstar of Bellydance.

I've travelled the world multiple times to teach and perform for thousands of students across the globe.
​
Thanks to my teachers, all of my personal and professional bellydance dreams have come true!

Now, I hope to become your teacher so that I can get to know you better and help you reach your dreams too! 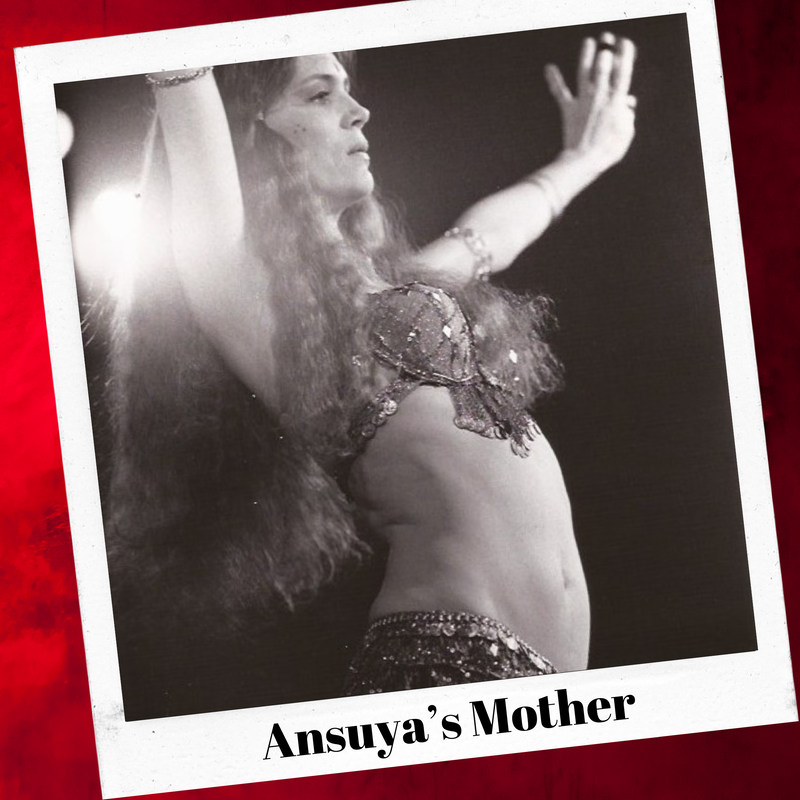 Welcome to your lineage...

The magick of bellydance in my life began with my mother, Jenaeni Rathor.  As you join this lineage, she becomes your bellydance mama too!

A pioneer of American Cabaret Style Bellydance, mama's career spanned 30 years of performing and teaching in New York and Los Angeles. Her headlining Cabaret Club engagements in New York included Ali Baba and the Egyptian Gardens. In Los Angeles: The Seventh Veil,  the Greek Village, and The Fez. In Central California: Charly's at The Beach.

Along with performing at countless parties, cultural events and the Renaissance Faire,  she also owned and operated two full blown Cabaret Clubs: Greektown and Chandrika. The latter of which included Bellydance, Indian Dance, and Flamenco and also featured a dance studio of same name.
​
Mama raised my brother and I in the artistic haven of Ojai, California where she taught classes, directed the troupe Yaleil and offered annual concert presentations at The Ojai Art Center. I grew up in this creative environment with her dedicated coaching.

When I was a teen, we moved to Hawaii and held an engagement bellydancing together at Hajibaba's Moroccan Restaurant.

Though mama has now crossed over, I feel a strong connection to her on a daily basis and most especially when I dance... and definitely when I see my student's carry on her path! 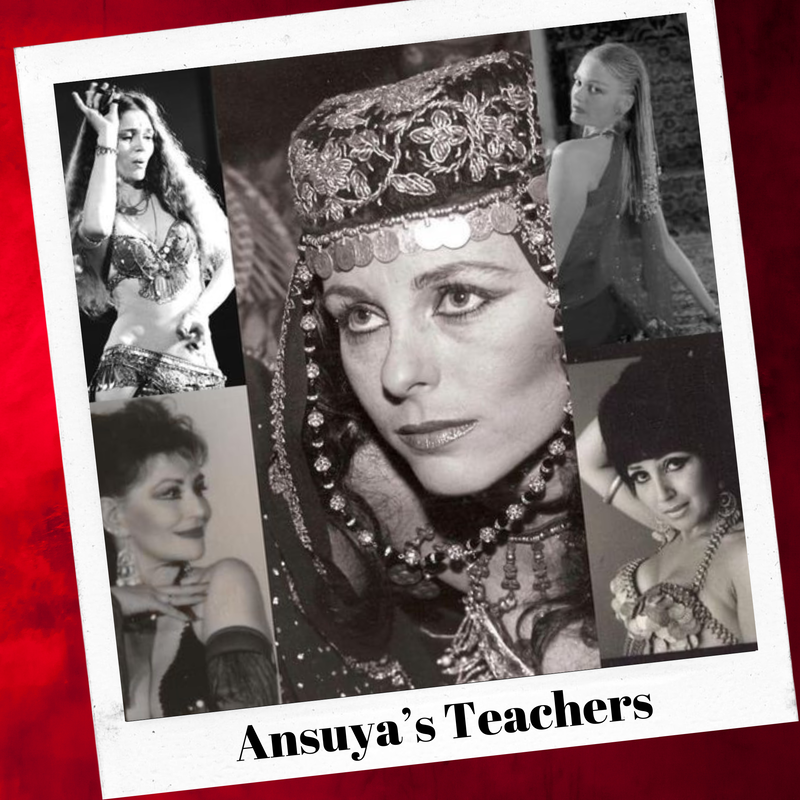 ​Alexandra King and Aleili are my mother's proteges who also became my teachers.

​Antoinette was the first dancer she ever saw and  Feiruz Aram was a contemporary - both of whom also had great influence on me.

My teachers are among the pioneers that made a cross cultural connection and cross cultural exchange thrive in the 1960’s - 1980’s Middle Eastern Night Club scene in the U.S.

They are some of the first to create theatre shows, multi-cultural festivals and unions.  They developed their art forms to awe inspiring levels, took teaching to deep and expansive realms, forwarded feminism and sensual empowerment for their students, are the original fusion artists, created diverse and bonded communities, and were each wildly deep, entertaining and inspiring on personal levels as well!
​
My strength, happiness, and success is built on the gifts of these muses sent from heaven and it is a privilege to spread their teachings as I carry on their work fused with my own.

American Cabaret Bellydance has acted for me as the quintessential model for female empowerment, multi-cultural representation, embracement of diversity, and true sisterhood. 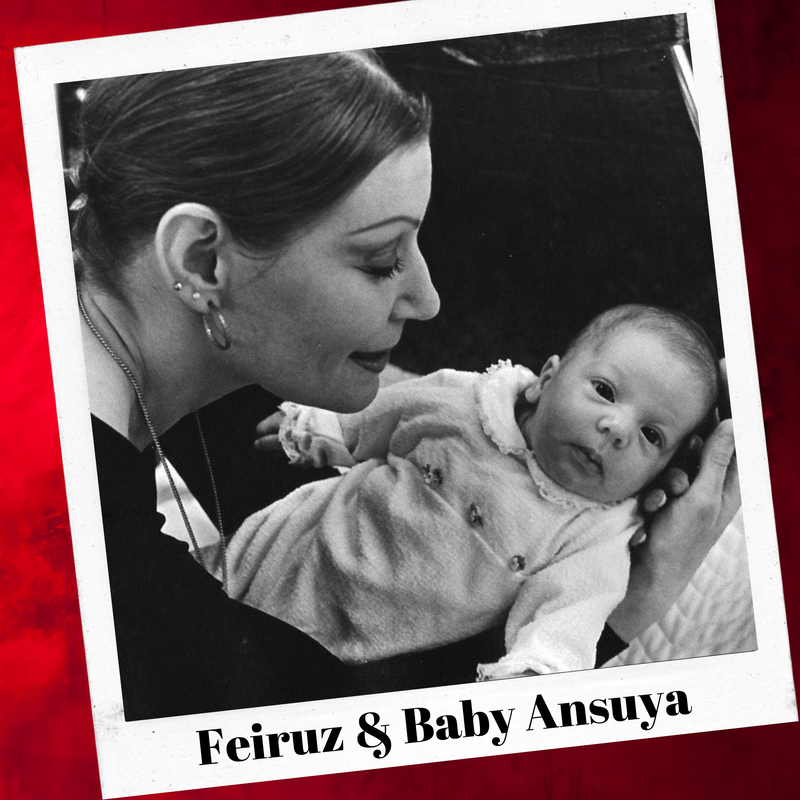 Legendary Bellydancer, Feiruz Aram holding me as a baby ​in Chandrika School of Bellydance, co-owned by Jenaeni and Feiruz.

Slideshow of small me...

​My first performance was at the age of four. I remember it so well! It's never too early or too late to hop on the magic carpet ride of bellydance!

I grew up to be a three-time Golden Belly Award winner, a recipient of a Best Cabaret Bellydancer of the Year Award from the International Academy of Middle Eastern Dance and became one of the original Bellydance Superstars. Quite the mix of spotlight glamour and behind the scene's grit! The stories could fill a book - and one day they will!

I'm feel very honored to have also starred in three game changing Bellydance documentaries: "American Bellydancer", "Behind the Shimmy", and "The Fez Documentary". 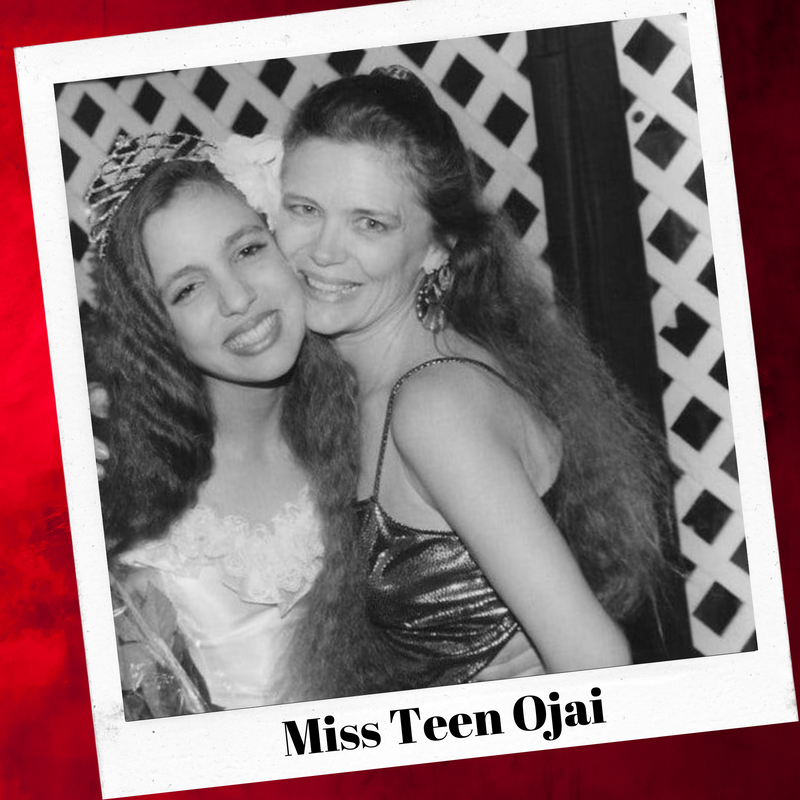 ​Along with winning the title of "Miss Teen Ojai" and modeling in Hawaii and Japan, my love affair with the camera continued with numerous television appearances as both a Bellydancer and an actress.

I'm a proud SAG-AFTRA member with credits including Days of Our Lives, Judging Amy, V.I.P, Jack and Jill, The Jim Jay and Ann Show, Live with Regis and Kelly, The John Mackenroe Show, Jimmy Kimmel Live, The Tonight Show with Jay Leno, MTV Canada, and entertainment and news shows around the world.

It has also been a thrill to appear in music videos for Beck and Sons of Funk and even become my own version of a "Bond Girl" in the titles of 2000 Special Edition Release DVD of Octopussy!

Directing my own troupes has been a beautiful experience of sisterhood and allowed me to showcase what became award winning choreography.

As a BDSS member, I toured with the famous rock festival Lollapalooza and have been on my own independent teaching and performance tour of the world multiple times. During this era, I was able to perform in some of the world's most distinguished theaters including the Follies Bergere in Paris, France and the Victoria Theatre in Barcelona, Spain. 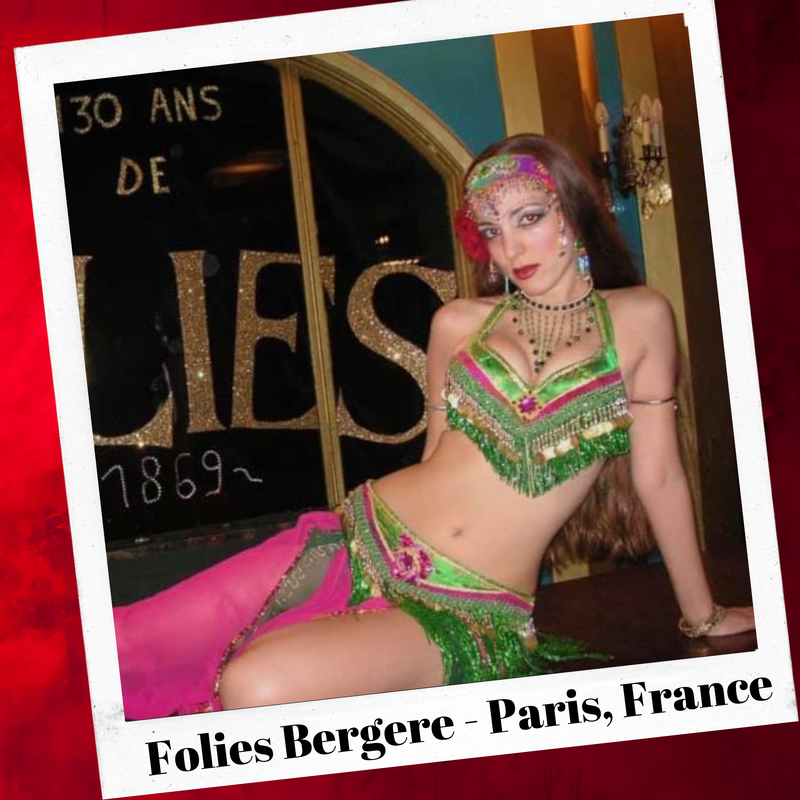 ​Performing with live musicians for almost a decade at the top Middle Eastern restaurants in Hollywood (including Al Amir and Byblos) allowed me to share my art with countless celebrities.

One of my favorite collaborations was with exercise leader Kathy Smith on her Bellydance and Fitness DVD, Flex Appeal. Being able to add this to my collection of 15 other top selling DVD's was a crowning moment.

While in Hollywood, I was also able to choreograph for the daytime drama, The Young and the Restless and enjoyed celebrity students in my classes.

So much fun! But also an exhausting couple of decades!

I'm grateful for the burn out, as it introduced me to the self-care industry and allowed me to expand my practice and offerings to once again include more of the mystical side of the art form that I had grown up with.

I chose the online world as the best platform for these offerings and pioneered online Bellydance classes!

Here on this site, I offer hundreds of videos covering every style and aspect of Bellydance and I conduct my group classes and performer and instructor certifications via Zoom.

​To accompany this, I facilitate a community Facebook Group where my online students (Cyber Goddesses) can interact with me and each other to receive lots of extra tips on the goddess lifestyle including make up, costuming, and sacred space advice. 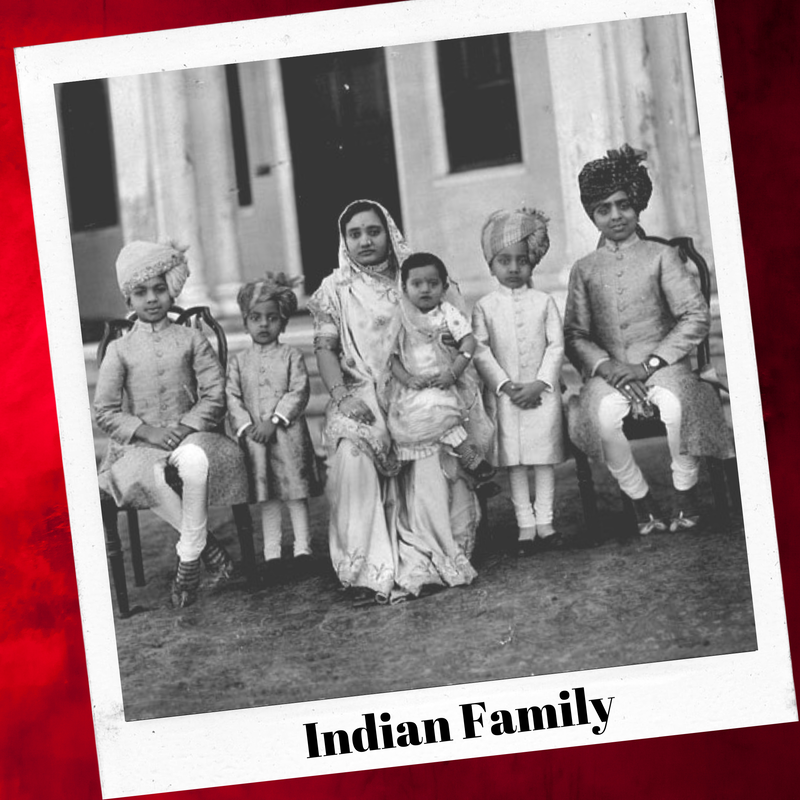 ​My ethnic background is diverse. French, Irish, English, Welsh, Dutch, Scotch, and German on my mother's side and East Indian on my father's side. I, myself, am a fusion! Traces of European Gypsy and Rajasthani Gypsy are suspected in my bloodline.

My Indian family, being of the Rajput caste (Rathors of India) were a Royal Family during the time of the Princely States.

My father, Narendra Singh Rathor is second from the left in the photo above, next to his mother, my namesake. My father's father was the Prime Minister of Ratlam, Rajasthan and my father's uncle was the Maharaja.

My wild mix of origins, along with growing up in the spiritually and ethnically diverse artistic communities of Ojai and the art scene of Los Angeles, California, as well as my 20 year career touring the world - has connected me to creativity in all cultures.

I love to represent my passion for diversity in my life long work spreading multi-cultural dance awareness through teaching around the globe. All of this, plus being the daughter of a mixed race marriage allowed me to grow up with a progressive leaning mind, an open heart, and a passion for boundless creativity. Coming from very humble means and working extremely hard for my art has also added to my desire to bring the magic of bellydance to everyone. 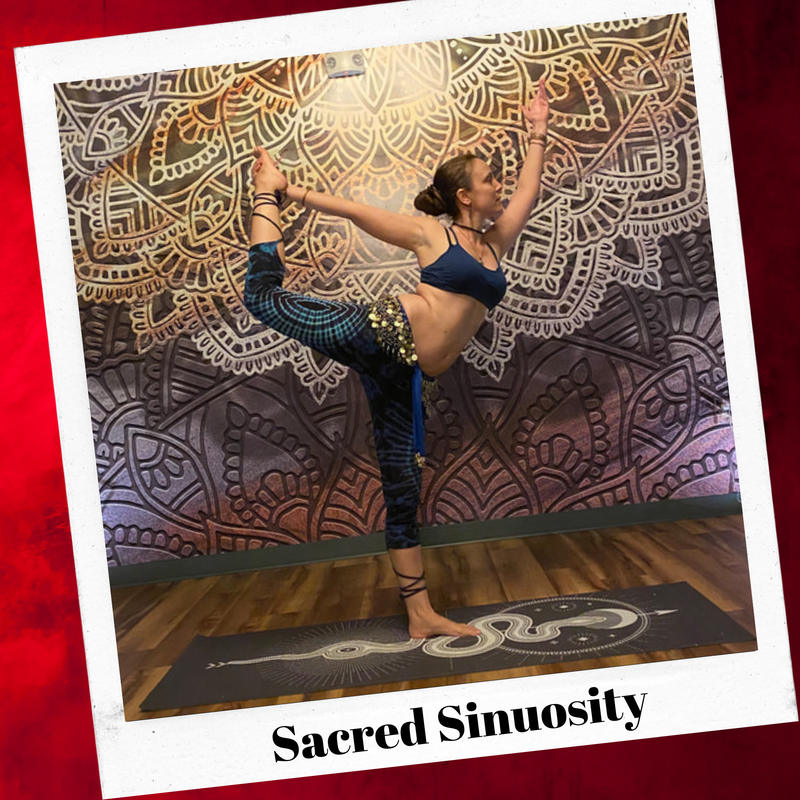 ​Along with promoting dance fusion as one of many effective ways to bridge cultural gaps, I'm super passionate about the sensual empowerment of women. I feel dedicated to linking Bellydance and Yoga to the awakening of Shakti Power and Kundalini Rising through an understanding of how the practices of Bellydance and Yoga, when fused, are exquisitely effective at flowing Prana (life force energy) through the Chakras and Nadis of the physical and auric body, in order to bring each women into her full goddess power as she connects with the feminine divine in the blissful samadhi of ecstatic dance.

Enthralled with this realm of possibilities, I attained my 50HR Yin Yoga Certification and become an RYT® 200HR Registered Yoga Teacher.

The adventure of discovery through this portal of work has been truly magickal and inspired me to create my "Sacred Sinuosity" - TM Yoga-Bellydance Fusion Program for students to develop and enjoy this unique practice as well as for those who wish to become certified teachers! 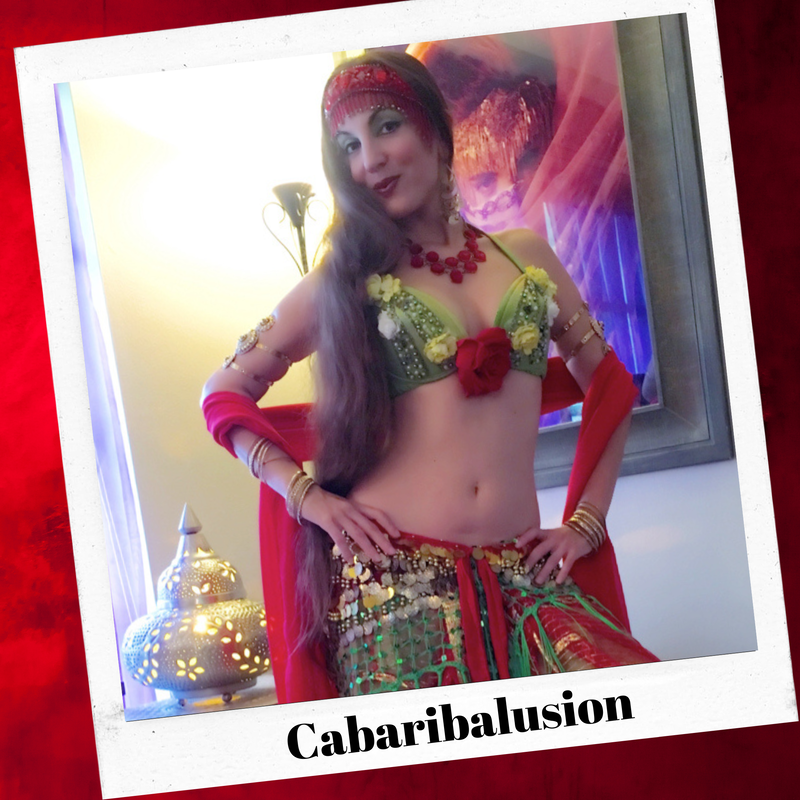 To keep up with the eclectic nature of my work, I sometimes refer to my style as "Cabaribalusion" since I love to combine Cabaret Bellydance with Tribal and the fusion flavors of Indian, African, Spanish, Gypsy,  and Egyptian dance.

I'm thankful to have a reputation for energetic, sensual, emotionally expressive,  improvised performances and for making empowering connections between the practices of Yoga, Magick and Bellydance.

If you become my student, it will be my absolute delight to share all of my "secrets" with you!
Let's also connect on social media & feel free to email me with questions! 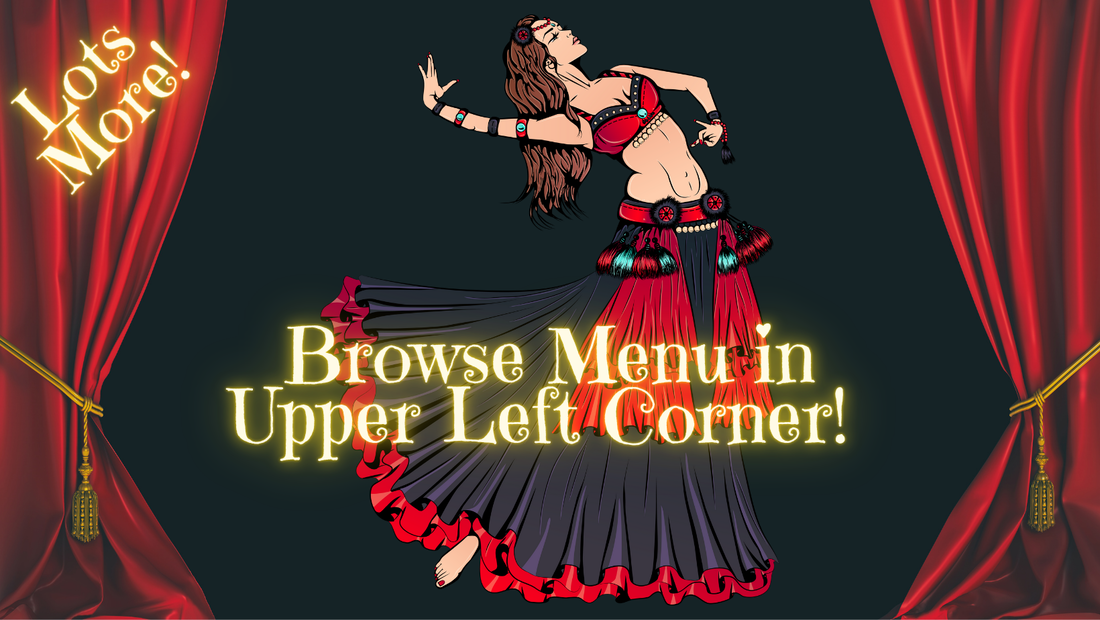